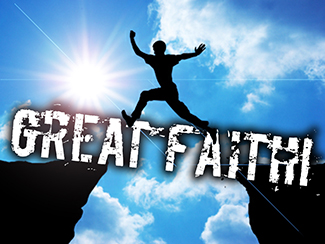 Several times in our bible we find accounts were Jesus was approached or approached someone and declared that they had more than the average faith, they had “Great Faith”. The Roman officer in Matthew 8:5-13, the woman with the issue of blood in Mark 5:25-34, and a Gentile woman in Matthew 15:21-28. Interestingly none of these were of the Jewish faith which makes the statement of Jesus even more profound.

We can look at many others such as Noah, Ruth, Joseph, Phillip, Paul and others and see that they exhibited much faith but these three are pointed out as having “Great Faith”. The bible tells us that we all are given faith, Romans 12:3, “For I say, through the grace given unto me, to every man that is among you, not to think of himself more highly than he ought to think; but to think soberly, according as God hath dealt to every man the measure of faith.”

As I ponder on the “Gift of Faith” and “Great Faith” my first reaction is that I have never functioned in this area. But recently as I reflected on this I now believe that I have received a faith that I would not ordinarily have. Before Jesus Christ I believe a supernatural faith. My youngest daughter was diagnosed with Neuroblastoma at three months of age that crushed me to the core. It was pretty much a death sentence though the doctors would not give us any percentage on her chances. She had surgery to remove a tennis size tumor then several months of chemo. But I want to concentrate on the night of her surgery I had come home that night and as I laid in bed I surrendered my life to Jesus Christ and a supernatural feeling assurance came on me that in spite of what we were seeing and hearing it was going to be okay!

Just recently I had a similar experience as my daughter once again has been diagnosed with a cancer called Sarcoma Synovial which is inoperable and according to the medical field fatal. Of course this crushed my family and I and despite an astounding number people praying was not going to well. I couldn’t help but plead to God for healing and many people told me she would receive that healing. At the onset I had declare “We walk by Faith not by Sight” But I will be honest, doubt was overwhelming me and found myself very sorrowful and sad. I didn’t believe my words as I declared Isaiah 53:5, “But he was wounded for our transgressions, he was bruised for our iniquities: the chastisement of our peace was upon him; and with his stripes we are healed.”That all changed recently as I can’t pinpoint the exact time or how, I do know it was a Wednesday that that same assurance I had way back when had prayed that prayer at home came over me and by “Great Faith” in spite of what I hear or see will be healed once again to the Glory of Jesus Christ!

This is not a faith that I can say generated in me but it comes from my love of God and His love for me!

Been a Christian for 35+ years, a Pastor for 15+ years with the emphasis on teaching the word of God from sometimes a different point of view than was taught. Have authored 4 books to this point. Am Married and have 6 children, 13 grandchildren View all posts by jman9582015